Bed bug bites can look very similar to other types of insect bites. A bite from a bed bug can appear as a red bump with a darker center and lighter, swollen area surrounding it. 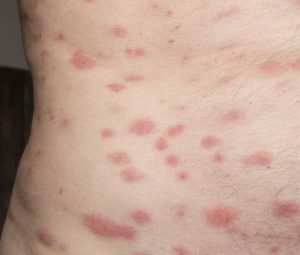 Two things that set bed bug bites apart from other insect bites are:

The biggest difference between bed bug bites and flea bites is the pain level. Almost immediately after being bit by a flea, there will be pain. Bed bug bites do not hurt until symptoms show up hours later. Flea bites are most commonly grouped on the lower part of the body and around the ankles in random patterns. Bed bug bites appear in lines. While both bites can cause red bumps and itchiness, bed bug bites tend to be significantly larger.

How to Identify a Bed Bug Bite

It’s understandable why bed bug bites are often confused for other insect bites. This makes it important to know what sets bed bug bites apart. If you suspect a bite on your skin is from a bed bug, it’s best to inspect your home for physical signs of bed bugs.

Back to Bed Bug Identification

What Do Bed Bug Bites Look Like? in Georgia